Here is the second installment of our "Meet the Coaches" blog series.  This week we interview Megan Ganley. 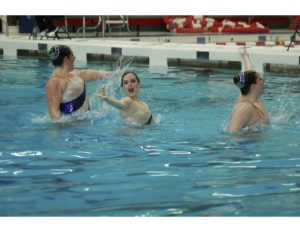 How old were you when you started Synchro? Where was it?
I started synchro when I was 12 years old and in 7th grade. I swam for the Southern California Coralettes for 1 year and the Meraquas of Irvine for 3 years.
How did you hear about Synchro and why did you want to try it?
I was leaving swim team practice one night when I saw, from over a fence, a girl flying through the air! I went to the diving well to investigate and saw the Junior Team girls swimming through their routines. After watching just one lap, I knew I wanted to give it a try!
How many years were you on a competitive Synchro team?
I swam for 6 years! (4 years in middle/high school and 2 in college at Boston University)
What was the coolest city you competed in?
Stanford, CA! After collegiate nationals at Standford University, we took a quick drive to take a tour of the Pixar Studios campus!
What was your favorite routine/music?
I once swam a duet/trio to Monster's Inc.
What was your go-to snack while competing?
Red Gatorade!
Was there something special you HAD to bring with your to competitions or while traveling?
TurbieTwist hair towels to keep my long hair from completely soaking my team tracksuit before awards!
Did you make any lasting friendships during your synchro experience?
Yes! Some of my teammates from college are coaches now, too!
What was your greatest success as a synchro athlete? What was your greatest challenge?
My greatest success was getting the opportunity to compete alongside some amazing athletes at the U.S. Open.
My greatest challenge has always been keeping my ankles together!
Did you have a favorite move?
Split rocket!
What made you come back and coach?
I have had so many happy memories as a swimmer, I wanted to come back and help create some happy memories for the next generation of synchro girls!
What the best advice you can give to ANA athletes?
Set little goals for yourself each meet. As long as you make progress towards your goals, it doesn't matter if you go home with a ribbon/medal or not.
And last, did you have any hilarious experiences during your Synchro years that you would like to share? A slip up? A wardrobe malfunction? Knox fiasco? Travel nightmare?
I had a travel nightmare before Age Group Nationals one year. My entire team was traveling a few hours by car from the airport to the competition pool the day of the meet. This was before GPS, so all the drivers had to follow the lead car to know where they were going. My car was separated from the group and we spend hours trying to find our way. We got to the pool after the first routine started, and we were draw 4! Thankfully, we were already knoxed and in our suits. We hopped into the warm-up pool for a quick lap and then walked out on deck to compete!
Practice Start September 12th 2022. See you soon!