Juliette has always loved swimming. As an infant, she attended baby swimmer’s classes with her mom, and she was always overjoyed to get into the pool. They would sink under water and play mommy and baby dolphin. It’s no wonder that years later her synchro nickname would be “Dolphin!” 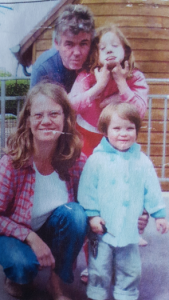 Juliette with her family in France

By age 5, Juliette was taking swimming lessons and learning the strokes so fast that the swimming coach asked her to join his pre-competition team. Juliette swam competitively for 5 years, but her greatest joy in the pool was swimming under water and doing tricks. She realized this is what she wanted to do and pleaded to her mother, “I would really love doing synchro swimming, that is my dream.” Juliette’s mother, Florence, immediately searched around for synchro clubs and found one in a town called Orsay. It was a big commitment, but her father Patrice drove Juliette to and from Orsay each three times a week so she could compete on the team.

Just two years after joining the Orsay synchro team, Juliette won a gold medal at the regional competition (Paris region), and that is when she was given the nickname, “Dolphin.” 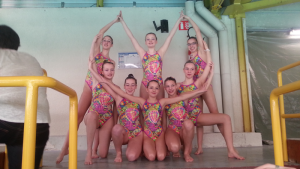 Juliette loved competing with her synchro team in France, but when she turned 15 years old, her natural sense of adventure led her to dream an even bigger dream.  She longed to travel abroad to swim and study in another country! Did such a program exist? Could she leave her brother and parents? Would she be able to realize yet another dream?

Florence and Patrice began searching for programs in Argentina and Australia, but it was a random meet-up with Sylvie Neuville (Director of Synchronized Swimming in France), that led her to ANA synchro. Juliette’s mom wrote to the President of the US Federation, Myriam Guez, and Myriam found two programs in the US, one in California, and the other at ANA Synchro. Coach Leah was notified and very open to the idea of an exchange student.  Luckily for ANA Synchro, Juliette made the decision to come to Massachusetts when Leah found her a wonderful host family to live with for her nine month stay.  The family that is hosting Juliette is the Topping Family, who have two daughters of their own-- one of them, Lucy, competes on the 16-19 age group team with Juliette. Lucy and Juliette also attend North Andover High school in their sophomore year. The Toppings have had an amazing experiencing hosting Juliette since January. In addition to school and synchro practices the Toppings have taken Juliette to New York City and they threw a surprise party for Juliette’s “sweet sixteen” birthday. Allison Topping, Lucy’s mom, reflects on the experience so far,

“It has been a wonderful experience for us as a family to have Juliette living with us. She is a great addition to our family. We are enjoying having her experience our everyday routines with us and have enjoyed creating some special memories for her so far as well.  We look forward to creating many more memories with her over the next few months.” 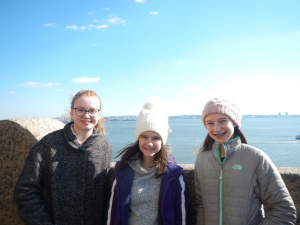 Juliette with Lucy and Hannah Topping

Juliette seems to have made quite a “splash” with members of her 16-19 age group teammates as well. The girls enjoy chatting before practice and in the locker rooms—and they are impressed by how hard Juliette has worked to be a perfect fit for their team. Coach Leah, a big proponent for Juliette’s adventure, has been thrilled with Juliette’s adjustment to ANA’s Synchro program. She shared her thoughts,

“It’s been such a pleasure to coach Juliette. She came into the team eager to learn as much as she could from us. I could tell that she was new to some of our training, especially the land portion but she gave her best and has continued to improve in such a short amount of time.  I can tell she is committed to synchronized swimming and working hard; she learned our routines rather fast and started to compete with us this March, only two months after her arrival. In and out of the pool, she has blended very well into our ANA Synchro family. Her personality seemed to make a good connection with our coaching staff and her teammates – inspiring those around her to keep at their routines and cultivate passion as a group.”

Everyone at ANA hope that Juliette will bring home wonderful memories of her time spent in the US --and competing for the synchro team. Let’s hope that this is not the last exchange students we have at ANA! The opportunity to learn how others live, and to understand their unique culture, style and traditions is a privilege and a great benefit to the ANA team.  Thanks for sharing your life with us, Juliette!

Coach Reem has beautifully summed up Juliette’s impact on the ANA synchro community:

“Juliette has been an incredibly amazing addition to ANA. She is fast, intelligent and mature. It is inspiring that at her age, she left her family, country and school to come here and learn everything new on her own. This courage allows her to self-nurture and all girls can learn from that. She’s adapted and fit in so well that sometimes I forget she’s from an entirely different culture. The 16-19 girls have really hugged her into their program and that’s a beautiful thing to watch. We are excited for her to bring back everything she has learned here and she will always be one of us”

Here’s to your next big adventure, Juliette, keep following your dreams!!